Share This Post!
This May, at the esteemed Radio City Music Hall in New York City, the National Football League will hold its annual Draft that has dated back to 1936. The seven round event matches NFL teams with players from Universities around the country who are eligible for the revered event.

Although draft picks can be traded to boost positioning, teams are awarded priority picking order based on their win/loss record for the year. The lower the winning percentage, the higher the team is placed in the picking order. This year the Houston Texans, who finished the 20913 season 2-14, will pick first and one Texas A&M graduate, and powerful attorney in the Houston area, Tony Buzbee, wants his team – the Houston Texans – to draft directly from his alma mater in the form of Heisman winning quarterback Johnny Manziel. The sign reads, “Keep Johnny football (a nickname assigned to him by the media) in Texas!”
Truth be told, a lot of teams have their eye on the football slinging phenomenon, and leading up to the draft more and more will be looking for ways to trade down in an effort to get his arm in their uniforms.

The question is, will Houston take him? Or will they leave their prized position in the hands of Case Keenum, Matt Schaub and T.J. Yates? With the number one pick they can have Manziel if they want him, without incident. It is completely up to the organizations front office, and it will be interesting decision that the city of Houston, including Mr. Buzbee, will not take lightly. Either way, Manziel should receive a lucrative deal no matter where he ends up, and the team that gets him will be better off with his arm at the helm in the long run. 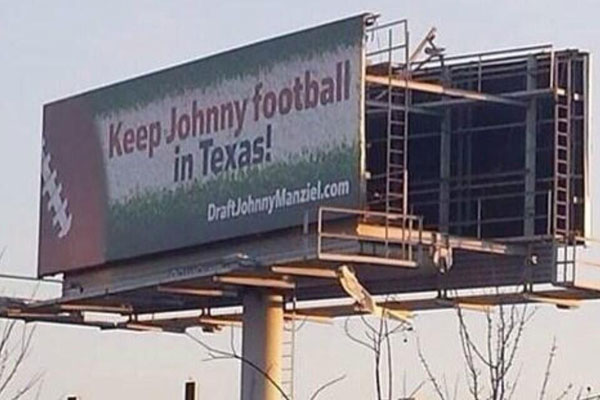