HOME > SPORTS NEWS > And Then There Were Four: NFL Conference Cham..

And Then There Were Four: NFL Conference Championship Match-ups 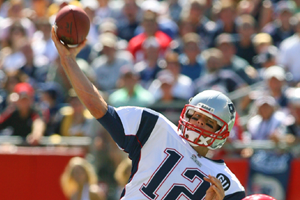 BigStock Photo
The 2014 Super Bowl attendee list was cut in half over the weekend, and two of the four teams remaining will be heading to the Meadowlands in New York (actually, New Jersey, but you get the idea), for Super Bowl XLVIII! This weekend’s match-ups will tell all, and the line-up will be set for the NFL party all fans dream about their team playing in when the season kicks off.

Two lucky, proud, and no-doubt excited, sets of fans will spend next Monday morning regaling their friends with stories about how they knew “all season long that ‘they’ were going to the Super Bowl this year!” That’s what we all say, by the way, but two of these four teams’ fans will actually get to say it...

New England Patriots v. Denver Broncos
“So, we meet again!” Is what I imagine Tom Brady saying to Peyton Manning during pre-game warm-ups. The two veteran quarterbacks have quite a past from when Manning was with the Indianapolis Colts. Although Brady is still hanging around Foxboro, representing the relentless, never-say-die Patriots, this game almost certainly belongs to Denver. That is not to say that it will not be a hard fight on both sides. Keep in mind, during the regular season, the Patriots pulled out a come from behind win against Denver at home. A game Mr. Manning certainly has not forgotten, and one that calls for redemption this weekend.

San Francisco 49ers v. Seattle Seahawks
The overall consensus with these two teams, at least from everything mentioned from NFL experts, news crews and fans, is that these two teams genuinely hate each other. To that, I say “Great!” It has been a really long time since I’ve seen two NFL teams go out and beat the crap out of each other, without offering niceties before the game. Here’s to getting back to the old school form of football, where division rivals really had no love for each other, and simply wanted to not only win, but destroy the other team.

Good luck to everyone involved. Two of you are going to the Super Bowl!

"And Then There Were Four: NFL Conference Championship Match-ups" User Comments