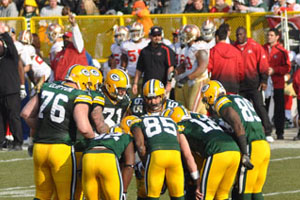 Bigstock photo
Now that the Detroit Lions have finally shown themselves the door, it all comes down to the very last game of the season in the NFC North to determine who is going to a) Win the division and b) Be eliminated from the playoffs altogether. The Green Bay Packers will travel to Soldier Field to take on the Chicago Bears in what will be their last chance to vie for playoff contention. The Bears? Same thing. Whoever wins the game will grab the division title, and a playoff appearance. The losing team? Well, they are going home.

The same holds true for the Dallas Cowboys, who are playing at home against their division rival Philadelphia Eagles. The winner grabs the division title, and the loser goes home. This is the last shot for all four teams to make something of themselves this season, and two of them are going to fail.

The Cowboys’ quarterback position is in a questionable state, with Tony Romo suffering from a herniated disc in his back. The Eagles quarterback position has rotated wildly from Michael Vick to Nick Foles and back again more than once this season – with a random appearance from Matt Barkley from time to time. The Pack has been without their elite quarterback Aaron Rodgers since week nine, and although he is back in practice, there is no chance of him making it onto the field Sunday. The Bears will continue to start Jay Cutler, despite his poor performance and having a decent backup QB in Josh McCown. Quarterbacks, as always, take center stage in the NFL, but none more than they will in these two games. Best of luck to everyone, as this really is for all the marbles.