Share This Post!
Oh boy. First Major League baseball decided to interject the madness of replay into their formerly perfect game, creating a solicitous stir in the hardcore baseball community. The last couple seasons it has only been applicable on foul/fair/homerun/ground rule double situations that could not be determined without a second look. This was semi-acceptable, mostly because, well – fans had no say in the matter.

Wednesday, December 12, 2013 marked a completely new rule change by MLB officials that bans home plate collisions. This means if a hitter is rounding third, and there is a play at the plate, he can no longer collide with the catcher in an attempt to dislodge the ball, and get a “safe” call as a result. In fact, runners will not even get the chance to do so because in the rule change, “Catchers will not be allowed to block home plate.” What’s that, now? The runner just gets to waltz into home, scoring a potentially game tying or go ahead run, without anyone trying to stop him? Okay, okay. It may not be that easy, but it is getting out of hand.

Baseball is a huge part of the sporting landscape, and removing this segment for what appears to be player safety reasons seems completely out of line. Sure, it hurts when one guy charges into another guy, but one has a job to do, which is score, and the other is charged with stopping him from doing so. It seems maddening that neither player will be allowed to do their jobs in these once-exciting instances.

According to MLB, there is more to come...Nearly every play on the field, outside of balls and strikes, will be reviewable possibly as early as 2014. "Tag plays, out/safe at first, fair/foul past the bags, those are all going to be included," said Rob Manfred, MLB's chief operating officer. So what are the guys in blue going to do? How do they feel about all of this? From a fan’s perspective, it is safe to say that the game is being micromanaged, and the thrill is escaping with every inning that passes by. 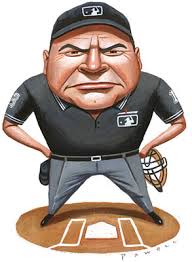